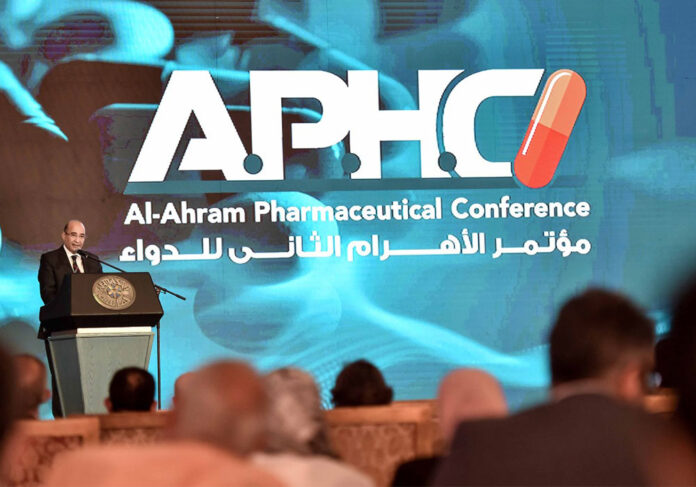 Yesterday, the second annual Al-Ahram Pharmaceutical Conference was launched under the auspices of Dr. Mostafa Madbouly, Prime Minister, and will continue for two days, during which he will discuss through 9 scientific sessions everything related to – “Localizing the pharmaceutical industry in Egypt” and providing practical solutions to its problems, and the participants in the opening session emphasized in the opening ceremony that Egypt is able to localize the pharmaceutical industry.

The kick-off of the conference was attended by Dr. Mohamed Ma’it, Minister of Finance, Dr. Khaled Abdel Ghaffar, Minister of Higher Education, and Dr. Muhammad Awad Taj, Advisor to the President of the Republic for Health and Prevention Affairs and Chairman of the Committee for the Settlement of the Pharmaceutical Industry, a number of governors, senior state officials, heads of the health and pharmaceutical sectors and representatives of major Egyptian and international pharmaceutical and medical supplies companies.

In his speech, the journalist writer Abdel Mohsen Salama, Chairman of the Al-Ahram Board of Directors, said that President El-Sisi will lead Egypt to become a regional center for the pharmaceutical industry and that the city of medicine (Gypto Pharma) is the most important step to provide high-quality treatment to all segments of society and export it to foreign markets.

He pointed out that this comes through practical and deliberate steps, foremost of which is the opening of the “Gypto Pharma City”, adding that the City of Medicine is one of the most important steps towards the localization of the pharmaceutical industry, so that Egypt becomes a center for that industry, providing high-quality products, and being accessible to all segments of society. And opening export horizons for African countries and the Middle East, through the city’s cooperation with international companies.

The journalist writer, Alaa Thabet, Editor-in-Chief of Al-Ahram, said that the dream of settling the pharmaceutical industry in Egypt had been fascinated by most Egyptians, over the past decades, and as long as they wished for it to become a reality on the ground, before it became so with the launch of the new republic, under the leadership of President Abdel-Fattah El-Sisi, stressed that the president has spared no effort to turn the dream of all Egyptians into reality, which is evident in the great efforts that are being exerted to settle this vital industry in Egypt.

Thabet added that Dr. Mostafa Madbouly’s sponsorship of the conference largely reflects the state’s interest in this vital sector, which in fact represents the lifeblood of nations and societies throughout the ages.

In his speech, Dr. Mohamed Awad Taj El-Din, Adviser to the President of the Republic for Health and Prevention Affairs, praised the role of Al-Ahram Foundation in organizing the second medicine forum, at a time when the repercussions of the Coronavirus pandemic continue on the whole world, from all sides, economically, health and financially, and we need concerted efforts to confront it.

Taj El-Din reviewed the state’s efforts to confront the repercussions of the spread of the Coronavirus pandemic, noting that what happened on the land of Egypt was not witnessed in Egypt at all, as measures were taken on the ground before the emergence of infections with the emerging virus, and preparations were made in advance at all levels to overcome the crisis deserves appreciation and praise due to these efforts.

Dr. Ashraf Hatem, Chairman of the Health Committee in the Egyptian Parliament, praised the vital role of the Al-Ahram Pharmaceutical Conference, and said that the conference in its first version was a major reason for issuing Law 214 for Clinical Trials and Clinical Research last year, pointing out that this law will be implemented as soon as its executive regulations are issued, there is a request to inform the Minister of Higher Education, Dr. Khaled Abdel Ghaffar, and Dr. Hala Zayed, the Minister of Health, of the need to work on reaching the executive regulations for the law.

He praised the role played by the state in dealing with the Coronavirus pandemic and all the repercussions associated with it since the beginning of the crisis and what is related to preventive measures and vaccination, pointing out that all medicines for protocols dealing with the virus were available inside pharmacies.

For his part, Dr. Mahmoud El-Matini, President of Ain Shams University and President of the Second Al-Ahram Pharmaceutical Conference, said that the pharmaceutical industry in Egypt affects Egyptian national security, stressing the importance of this sector in advancing the Egyptian industry and economy to a position worthy of its cadres and capabilities.

El-Matini praised the Prime Minister’s generous sponsorship of the conference, and the participation of all those interested in the pharmaceutical industry and trade represented in the Chamber of Pharmaceutical Industry and Commerce, the Drug Export Council and all local and international drug companies, in full coordination with the institutions of the academic community and scientific pharmaceutical research, all in order to provide effective and safe medicine for all Egyptians to ensure The best health situation to achieve the sustainable development goals of the United Nations and in line with Egypt’s vision 2030.

Dr. Tamer Essam, head of the Egyptian Drug Authority, said that the authority has a specific role in supporting the bonds of cooperation with international pharmaceutical companies, pointing out that it is one of the state’s arms to implement its vision, which emphasizes paving the way for the development of a strategy for the pharmaceutical sector aimed primarily at serving the Egyptian citizen as the cornerstone and the basis for all that the state seeks to achieve.

The head of the Egyptian Drug Authority stated that, through such conferences, it is necessary to clarify the problems surrounding the pharmaceutical sector, develop solutions for them, evaluate what was implemented in the past, and also work on appropriate planning in the future, especially the pharmaceutical industry, which is an important and vital industry.

He pointed out that Egypt’s Vision 2030, which includes an integrated series of clear operational plans in all aspects of life in Egypt, including infrastructure, roads, utilities, energy, cash reserves, legislative structure, media and awareness, pointing out the need for investors and manufacturers to have a vision to deal with everything It achieves the interest of development in Egypt and has a positive impact on the citizen.

Meanwhile, Major General Doctor Bahaa El-Din Zeidan, head of the Egyptian Unified Procurement Authority, indicated that Egypt has been discussing the problems of drug manufacturing and the obstacles to its settlement for decades, and they are being repeated in various specialized conferences, without reaching a realistic and tangible solution, which makes us wonder now: What is new in these problems?

In his speech, Dr. Khaled Abdel Ghaffar, Minister of Higher Education and Scientific Research, stressed that the pharmaceutical industry occupies great importance that stems from its close relationship to human health and life, and as important as this importance comes to every event associated with it and every institution, organization or company it works in, especially in this era. In which all sectors and humanitarian activities are witnessing an amazing development around the clock.