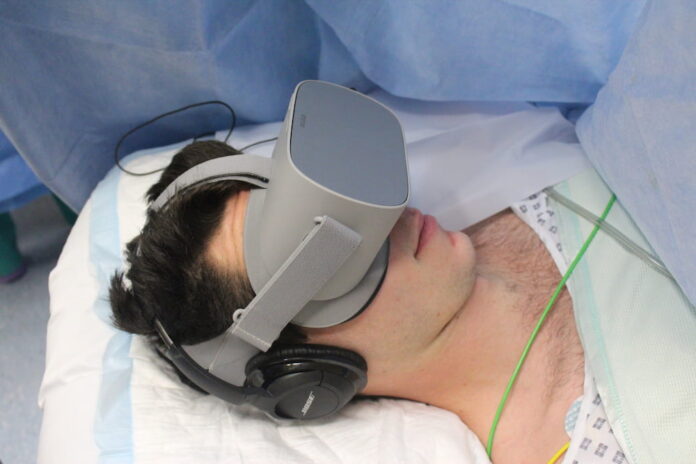 Some researchers announced at the annual conference of the European Society of Urology, the results of a new study they conducted, where the study showed that making a person live in a distinctive virtual environment may relieve the pain caused by surgical operations or any other uncomfortable medical procedures, without the use of anesthetics.

The study showed that result when virtual reality headsets were placed on the patient before the painful cystoscopy procedure, after using the patient’s behavioral and physiological data for the study.

The researchers conducted a study in order to reduce the use of anesthesia during surgeries that require continuous anesthesia, and at the same time reduce the pain associated with the operation, such as cystoscopy, as anesthesia may cause an increase in the risk of complications after the operation.

The study included placing patients who were held horizontally while undergoing cystoscopy, inside virtual reality, through the audio-visual effect, as this study provides the participants with a unique and unique experience, and less painful.

103 patients, who were included in the list of rigid cystoscopy with local intraurethral anesthesia, participated in the study conducted at the Medical University of Wrocław in Poland, with an average age of 66 years, whose data were used to conduct the study.

The patients were divided into two parts during the study, namely:

The study showed that the degree of pain of the participants in the second section, who performed the procedure with the use of virtual reality, was lower than that of the comparison group.

Although the degree of pain was reduced, the use of virtual reality glasses and headphones led to feelings of nausea and dizziness, but the patients confirmed that this was not a difficult matter that required stopping the operation.

All participants had an increase in blood pressure and heart rate, but those who used virtual reality did not have a significant rise.

- Advertisement -
Share
Facebook
Twitter
WhatsApp
Linkedin
Email
Viber
LINE
Telegram
Previous articleHow Many Veins in the Human Body? and Why Adam’s Apple Appears Only in Men?
Next articleGenomics in Healthcare: Transforming the Understanding of Diseases and Care Delivery