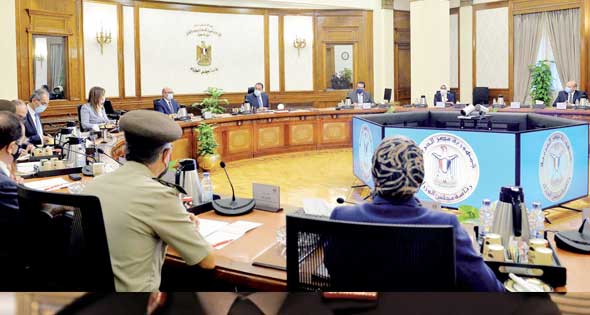 Prime Minister Mostafa Madbouly stressed the importance that President Abdel Fattah El-Sisi attaches to implementing the reference Egypt genome project for the Egyptians, through which Egypt will enter the era of precision medicine and gene therapy, to predict future diseases and ways to treat them, including epidemic diseases.

This came during the meeting held by the Prime Minister to follow up the steps of the human reference genome project for the Egyptians, in the presence of Counselor Omar Marwan, Minister of Justice, Dr. Khaled Abdel Ghaffar, Minister of Higher Education and Scientific Research, Dr. Hala Al-Saeed, Minister of Planning and Economic Development, and Dr. Hala Zayed, Minister of Health And Population, Dr. Amr Talaat, Minister of Communications and Information Technology, Major General Doctor Khaled Amer, Director of the Medical Research and Regenerative Medicine Center in the Armed Forces, Dr. Yahya Zakaria, Executive Director of the Egypt Genome Project at the Academy of Scientific Research, and officials of a number of ministries and stakeholders.

Dr. Mostafa Madbouly directed the necessity of developing clear mechanisms to expedite the implementation of this important project, in a way that contributes to moving Egypt to the stage of directive gene therapy based on diagnostic and accurate medicine, and rooting the design of medicines in line with genetic determinants to improve the health and quality of life of the Egyptian community.

During the meeting, Minister of Higher Education and Scientific Research, Dr. Khaled Abdel Ghaffar, reviewed the reference human genome project for the Egyptians, explaining that as soon as President Sisi launched the signal to start Egypt genome project, the project contract was signed between the Ministry of Higher Education and Scientific Research, represented by the Academy of Scientific Research technology, and the Ministry of Defense represented by the Center for Medical Research and Regenerative Medicine last March, and the preparation of the infrastructure for the implementation of this project was started.

He added that Egypt genome project aims to create a reference genetic database, through the study and analysis of a number of samples, to explore the relationships of genetic markers and genetic or genomic code with manifestations of health and disease in humans, which can be used to develop genetic determinants for early diagnosis and prediction of the most common diseases among the Egyptians; Such as heart diseases, tumors and genetic diseases, determining the causes and nature of the disease and the body’s response to treatment, providing early medical intervention, and determining the optimal treatment that suits the genetic factors of Egyptian patients in particular.

The Minister of Higher Education and Scientific Research indicated that Egypt genome project will also help in predicting future epidemiological diseases and determining ways to confront them. For individuals suffering from common diseases in the Egyptian society, to determine the genetic sequence and Egyptian genetic variants that determine susceptibility to diseases, and to provide specialized treatment methods designed based on genetic structures.

During the meeting, the benefits of implementing Egypt genome project were reviewed, which varied between improving the public health and health care system, improving the quality of life for Egyptians, reducing the cost of medical care, drawing up preventive plans that protect Egyptians from unexpected diseases and epidemics, treating incurable diseases, and applying pharmaceutical genetics in treatment. As well as developing medical sciences, developing new industries, and creating job opportunities in new fields.