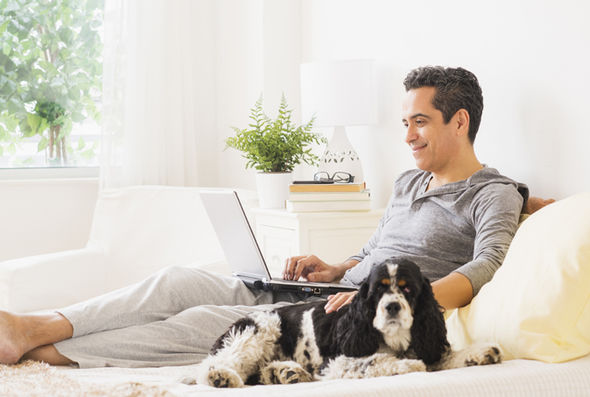 Coronasomnia and the dangers of working from bed, physical and psychological symptoms, and a change in the programming of the mind… What do doctors say?

The Coronavirus pandemic imposed closure of businesses all over the world, and quarantine in homes to limit the spread of infection.

This shutdown, which was disastrous for the global economy, required the continuation of business from home.

However, after not a short time since this forced labor, it was found that it has physical and psychological health complications that are no less important and dangerous than all the other symptoms that we experience as a result of multiple diseases.

The bed has become the store from which we practice correspondence, accomplish business, e-commerce, and others… Numerous studies conducted in this regard have shown that large numbers of people were doing their work from bed during closure and that not a small percentage of them began to suffer from complications that tests proved to be the result of this practice.

Some of them began to suffer from depression, including back, shoulder, and head pain, in addition to the digestive system and some kidney aches.

Why Does this Happen, and What are the Medical Guidelines?

After the increase in the number of auditors as a result of health problems that turned out to be the result of working from home for short periods and in improper positions.

After studies conducted on the risks of working from home in inappropriate conditions, doctors began to draw attention to this aspect of life, pointing out its dangers to mental and physical health.

And stressing specific guidelines that help protect health and pass the quarantine period with the least possible damage.

This illustrates what was reported by a study conducted last November, where 72% of the 1,000 people surveyed in the United States said that during the spread of the Coronavirus pandemic, they carried out their work tasks while at home, and in bed specifically.

This is 50% more than it was when the pandemic began.

And one in 10 people reported spending most or all of their weekly working hours, 24 to 40 hours or more, in bed.

Remarkably, this fact turned out to be especially true for young people.

In the UK, workers aged 18-34 are less likely to have a desk and chair, compared to workers of a different age group.

They are also twice as likely to choose to work from the bed as older people.

The study indicates that the tendency to work from bed is not only caused by the lack of a suitable seat, but it is simply that most people like the ease and feel of the comfort and warmth of the bed.

Today, there are thousands of Instagram photos under the hashtag #workingfrombed, many of them smiling, relaxing in their beds in their pajamas with a cup of coffee or perhaps a tray of breakfast next to them.

The study adds that turning your bed into an office can lead to a number of health, psychological and physical problems.

Even if you don’t notice them now, negative results may appear later, and they may be permanent.

Some people may have a desk on which they can put their computer or even a kitchen table, but they choose not to, preferring the comfort of the bed.

So it is important to realize that working from home is a privilege, and may not be available to hundreds of millions of people.

Also, a suitable space equipped with all work necessities is not available for many remote workers, which means that working from bed may be their only option.

For others, however, it is the easiest option that requires the least amount of effort.

A specialized survey showed that sales of “bedding tables” and lift-up pillows increased by a remarkable percentage.

The Dangers of Work From Bed

Experts rely on all this data to warn against giving in to this temptation, and they say that regardless of whether avoiding work from bed is possible or not, the useful advice remains the same: this is not good, neither for your body nor for your health, and it is very important to change your sitting position constantly, as well as the way the body rests, changing the part on which it rests whenever possible.

From a health point of view, they stress that the neck, back and thighs are exposed to more pressure and stress when one is sitting on a soft surface that encourages lying down or stretching.

This is harmful to many organs in the body, which Susan Hallbeck, director of the health care system engineering department at the Mayo Clinic, points out: “There is no proper position in bed, your body is not supported in a way that helps it function.”

She points out that young people, in particular, are prone to falling prey to this bad habit, as they may not feel its harm right away.

The pain will escalate with time, depending on how bad the habits have been over the past year, the damage may have already been done.

It depends on the person, but it may be too late to realize the problems that will have to be faced with age, caused by a poor work environment.

These diseases can be a simple headache, and may expand to include permanent stiffness in the back, arthritis, and what is known as neck pain, which is a pain in the bones, ligaments, and muscles of the neck.

So anything is better than continuing this bad habit, and when it is possible to stop it, let us stop immediately.

Doctors believe that when you work from bed for a whole year, the bad results are not limited to the body only, but it is possible that its harm includes a decline in your productivity and disruption of your sleep habits as well.

“As sleep and insomnia specialists, we recommend that the bed is for what it was originally intended for and not for work, especially for long periods of time,” says Rachel Salas, professor of neuroscience and sleep expert at Johns Hopkins University in Maryland, USA.

Doctors say that the damage is not limited to physical damage, but also psychological and behavioral damage.

The more time you spend watching TV or playing video games in bed instead of sleeping, your brain starts programming new habits that you can do these activities in bed.

Thus, it begins to associate the bed with these things, until it eventually develops into a conditional behavior.

This means that the mind reaches the stage of fully associating the bed with activities that have nothing to do with sleep.

According to studies, this is in complete contrast to what is known as “clean sleep” (or sound sleep), which is a term that refers to practicing the best behaviors related to sleep.

While searching for the latest news on the Internet or sending an email in bed are practices that violate the rules of sound sleep.

A BBC report says that when you create an online store in your bed and use your laptop, smartphone or Slack service platform, and all those bright screens on a daily basis, your mind and body eventually stop associating the bed with comfort.

This is considered one of the most important reasons for the prevalence of the phenomenon of “Coronasomnia”, meaning “corona insomnia”, in reference to the high incidence of insomnia and sleep disorders in the world in conjunction with the spread of Covid-19.

And if these cases are not general, that is, there are those who do not feel them, not because they are not actually harmful, but because the matter is due to the nature of each body, as is the case with other diseases.

Also, the extent to which a person is harmed by bed work is related to genetic and environmental factors, the extent of his bad habits, the duration of his practice of them, as well as his age.

These factors determine whether or not working out of bed for a year or more will actually yield poor results.

It is important to know that the body and mind may not feel the repercussions now, but their damage will appear one day.

Based on this, it can be said that the symptoms and damages of the Coronavirus pandemic are not limited to those infected with it, but to most of humanity, each according to his situation.

This may be another additional cause for concern in the new normal era.

But if this difficult period has taught us anything, it is that when it comes to health, it is better to be careful to stay safe than to feel sorry later.

Many health care professionals, including orthopedic surgeons and sleep experts, are warning of the dangers of working from bed for people working from home.

Sophie Bostock, the founder of The Sleep Scientist, said: “There is often a strong possibility that you will feel relaxed and comfortable when you are in bed, which is a good thing in the short term. But over time, working in bed can make you lose sleep.”

Continuing this for about a year, for example, or any long period would lead to chronic insomnia or the so-called circadian disorder.

This happens when our biological clock, which normally tells us when it’s time to sleep, is disrupted for a long time.

It is also possible to exacerbate other existing and unrelated sleep problems, such as restless legs syndrome, a condition in which a person feels uncomfortable in them and a constant need to move them.

Instructions to Releive the Dangers of Work from Bed

There is space in the house that allows choosing another room to work. “Some people have no other choice,” the founder of Sleep Scientist adds. “You have to learn how to psychologically separate the sleeping area and the work area.”

To get around this problem, she suggests throwing a different-colored blanket on the bed, changing the lighting, or swapping places with the kids — let them take lessons in your bedroom while you work in theirs.

“If you have to work in the bedroom, get a table and put it under the window in the bedroom,” she says. Sitting at the table puts you in a rigid position, and maybe creativity will come in better shape.”

And if you have to continue working from bed, the bad have degrees, so:

The dangers of working from bed are rising with the new work lifestyle, many people are working from home right now, it has a significantly bad impact on our health if we didn’t make up our mind.

Coronasomnia is an emerging disease that deserves to be monitored by health authorities and stakeholders themselves.

For all of us, this pandemic has imposed on us a new lifestyle that carries many changes and symptoms, the risks of which must be ascertained and dealt with awareness, in order to avoid the possible threat to our wealth: health.