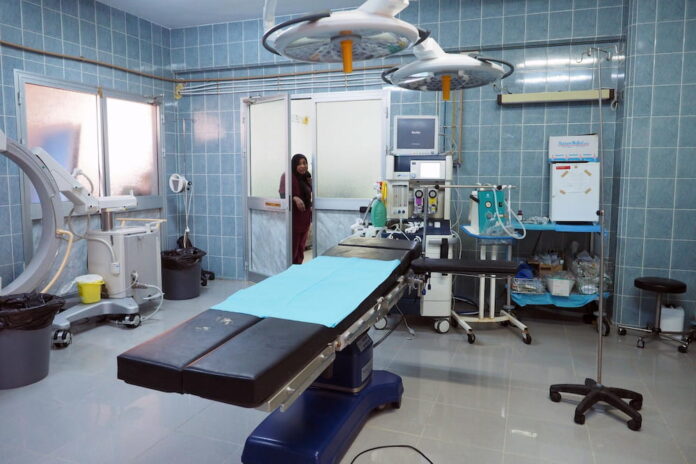 The Libyan government, headed by Abdul Hamid Dbeibeh, has recently been seeking to attract the largest possible number of Egyptian workers, especially in the field of healthcare services, in light of the urgent need to fill Libya’s shortage in this sector due to the scourge of war that Libya has been experiencing for years.

The Libyan Minister of Health, Ali Al-Zanati, met with Egypt’s Ambassador in Libya, Mohamed Tharwat Selim, to discuss aspects of cooperation between the two countries in the healthcare sector and to reach agreements that would develop the health sector in Libya and utilize the Egyptian expertise in this vital and important field.

A Libyan official source in the Ministry of Health revealed to “Sky News Arabia”, that during the meeting, several files were discussed, the most important of which is the activation of memoranda of understanding and agreements between the two sides, to bring in medical and auxiliary medical personnel, cooperation in the field of primary healthcare, and training national elements, especially in the field of Pharmaceutical Inspection, Pharmacovigilance, Pharmaceutical Manufacturing, Pharmacoeconomics and Clinical Pharmacology.

He pointed out that the management of some hospitals had been handed over to Egyptian companies specialized in managing and operating hospitals, and a mechanism had been put in place to facilitate procedures for patients’ entry visas to Egyptian territory for the purpose of treatment.

For his part, Abdel Rahim Al-Mursi, Vice President of the Division of Employment Abroad, at the Cairo Chamber of Commerce, told Sky News Arabia that the requests for Egyptians to be hired by Libyan companies, especially in the medical field, did not stop at all in light of Libya’s permanent need for Egyptian labor in this important strategic field.

Al-Morsi expected that the procedures between the two countries would start, and the Egyptian workforce, especially medical ones, would be sent to Libya in the coming period, especially since Egyptian Prime Minister Mustafa Madbouly had signed earlier with his Libyan counterpart agreements for the return of Egyptian workers to Libya in a short period.

One Million Egyptian Workers Will Contribute to Libyan Reconstruction

Al-Mursi stressed that the matter will not be limited to the health sector only, but will extend to other sectors in electricity, energy and contracting in particular, especially since the requests for reconstruction in Libya are very large, and they have great confidence in the Egyptian worker, expecting that about one million workers will travel to Libya if a decision is issued to return the Egyptians to travel abroad, pointing out that Egypt had issued a decision to stop the travel of its citizens to Libya due to the scourge of war for security reasons and to protect their lives.

He pointed out that the Libyan government is moving towards benefiting from Arab and international expertise, to develop the private sector, free zones and trade, and to benefit from Libya’s geographical location, as a major gateway to North Africa, and an important strategic interface for European companies in particular.

The Libyan government dispelled all the fears of companies intending to return to the local market, after the factors of stability and safety that the state had become during that period, and that Libya was determined to provide more stability during the coming period.

The head of experts and advisors to the Libyan Minister of State for Economic Affairs, Ali Solh confirmed that the Dbeibeh government, in this regard, is communicating with companies with the aim of completing projects to build ports and airports, to facilitate the movement of transport between countries and the entry of the largest possible number of investment companies into the Libyan market during the coming period, and is also working to set in mind the portrayal of the education and health systems.

He believes that the most prominent obstacles facing the Libyan government currently are the failure to adopt the budget to start implementing some projects, and the budget’s link to sovereign positions may delay it for a considerable period of time, which impedes the completion of the legal form for recycling the wheel of previous projects and the agreements previously agreed upon by Libya and not even completed. Now because of the horrors of war.

Solh, told Sky News Arabia that these meetings aim to bring these companies back to the country in the fields of health, reconstruction, petroleum and other projects.

He continued: “On the international level, the Libyan government discussed with Italian, German and French companies mechanisms for building a clear partnership to resume work, inviting companies executing them and completing projects agreed upon years ago in the field of communications, energy and reconstruction.”

He pointed out that the Libyan government is moving towards benefiting from Arab and international expertise, to develop the private sector, free zones and trade, and to benefit from Libya’s geographical location, as a major gateway to North Africa, and an important strategic interface for European companies in particular.