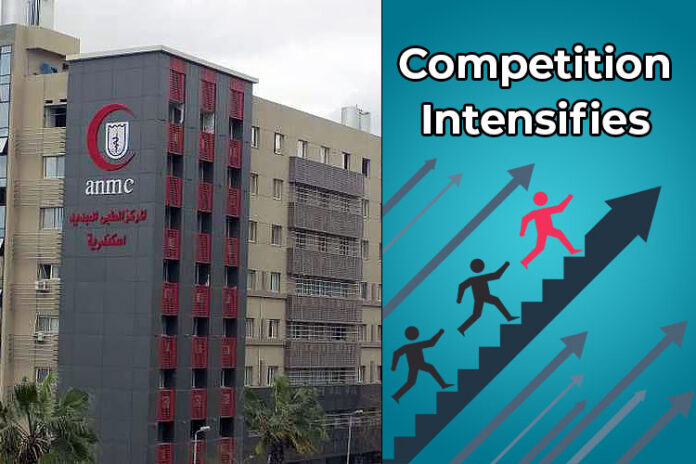 The competition to acquire the “Alexandria New Medical Services” Company intensified, with successive purchase offers and an increase in the bid price in order to win the deal.

Who is this company?

Alexandria Medical Services Company (New Medical Center), established in 1988, in Alexandria, the second-largest city in Egypt, provides medical services in a variety of specialties.
The company is listed on the Egyptian Stock Exchange, and Abu Dhabi Commercial Bank owns about 51.5% of its shares, and Tawasol Holdings for Financial Investments for Egyptian Investment owns about 25.9%, according to a previous statement from the company.

Last March, Abu Dhabi Commercial Bank appointed the Egyptian CI Capital Company, in order to promote the sale of its stake in the company, according to a previous statement to the Egyptian Stock Exchange.

Yesterday, the Egyptian Financial Supervisory Authority announced the latest acquisition offers for Alexandria Medical Services, submitted by a consortium of Tawasol Holdings for Financial Investments, and Maternity and Pediatrics Holdings, a subsidiary of Lime Vest, a company specialized in investing in developing companies in the Egyptian market, according to the website.

The FSA statement stated that the acquisition offer submitted by the coalition to buy 74.08% of the shares of Alexandria Medical Services Company, (which is complementary to 100%, as “Tawasol” already owns about 26%), at a cash price of 52 pounds ($3.3) per share, and up to The lowest 51% of the company’s shares.

This price is considered the highest in the competition to acquire the company operating in the promising healthcare sector in Egypt.

TAT Medical Services, a subsidiary of the Egyptian Alexandria Medical Investments Company, raised its offer to acquire Abu Dhabi Commercial Bank’s stake and up to 100% of the shares of Alexandria Medical Services Company to 49.04 pounds ($3.1) per share, compared to 45.53 pounds ($2.9) per share. It was submitted in May, according to a statement from the Financial Supervisory Authority on June 8.

This price increase came just two days after the Emirates Advanced Investments Holding Company offered to acquire the shares of Alexandria Medical Services Company at a price of 47,986 pounds (3.1 dollars), according to a statement from the Financial Supervisory Authority on June 6.

Among the contenders for the deal, the Egyptian Cleopatra Hospitals group company, which submitted a bid at 38.53 pounds ($2.5) per share, according to a statement from the Financial Supervisory Authority on May 17.

Among the companies that have expressed interest in the deal, are the Egyptian Seha Capital Company, the Egyptian Nile Center for Radiology and laboratory services, and the UAE’s Global One Health Care Holding, according to previous data from the Financial Supervisory Authority.

Digital Operating Rooms, What Are The Latest Technologies?

The Cost of a Dental Crown: What You Need to Know

How Long Does The Shingles Vaccine Last? When Should You Get Another Shot?