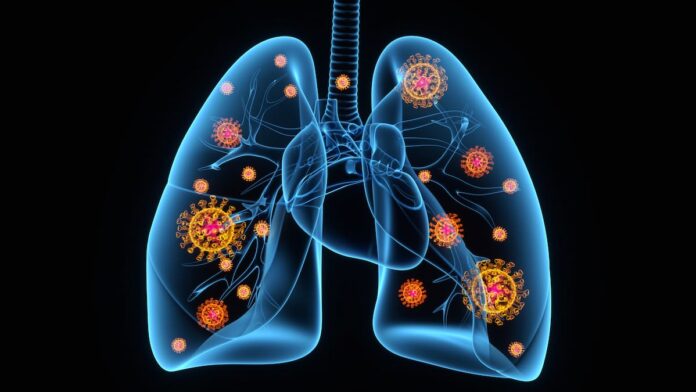 With the number of people infected with the new Coronavirus exceeding one hundred and sixty-six million confirmed infections, the eyes of the world are turning to scientists and researchers, everyone is waiting – impatiently – for the results of the research that is being carried out in full swing in order to find an effective treatment for the virus.

In order for researchers and scientists to be able to confront this pandemic that has spread in the world like wildfire, they must be armed with accurate understanding and clear knowledge about that virus.

Watch the following 3D model that shows how Coronavirus penetrates lung cells in the human body and infiltrates the lung to reproduce and generate millions of viruses to infect other cells in the body.

How can Coronavirus penetrate respiratory cells in the lung

One of the keys to tackling this pandemic is understanding the virus-recognition receptor mechanism that regulates its ability to infect and cause disease.

This is why a large sector of researchers is working to study the genetic material of the virus in an attempt to reach the evolutionary relationship between it and other viruses, which contributes to its understanding and knowledge of the mechanism by which it works inside the body.

In this context, the journal Nature published a new study conducted by a team of researchers at the University of Minnesota, USA, that can remove a large amount of the mystery surrounding the virus.

The study made a comparison between the emerging coronavirus and its closest relative of the coronavirus family, the “SARS” virus, which caused the 2002-2003 outbreak and led to the death of more than 700 people.

The results of the study showed that the mutations that occurred in the emerging coronavirus made it more virulent and dangerous, and although both viruses bind to the same receptor on human cells – the receptor for angiotensin-converting enzyme-2 (hACE2) – but the emerging coronavirus has the ability to bind to it more tightly, Thanks to the mutations that occurred to the genetic material and resulted in changes in the virus’s structure as a result of changing some amino acids in the “receptor binding domain”, which is the part that binds to the hACE2 receptor, known as RBD, which led to an increase in its affinity for these receptors.

The structural composition of the Coronavirus consists of a protein membrane with a diameter of 50-200 nanometers, and inside it is encapsulated the DNA of the virus RNA, and like the rest of the coronaviruses, the virus consists of four types of structural proteins that contribute to the formation of the body structure of the virus, including the protein (S), which is known as ( The itch protein), which forms the spinal protuberances on the surface of the virus and gives it the characteristic coronary shape.

“In order for the virus to infect a cell with an infection, it uses protein (S), which binds to the receptors,” says “Fang Li,” an assistant professor in the Department of Veterinary Sciences and Biomedical Sciences, University of Minnesota, USA, who led the research team for the study. “On the host cell membrane – lung cells – such as the link of the key to the lock, and this link enables the virus to enter the cell, so it is an important step in the occurrence of infection. The mechanism of that linkage also determines the type of host that the virus can infect.”

According to the press release issued by the University of Minnesota, America, this study is the first of its kind to use X-rays to determine the three-dimensional crystal structure of the compound resulting from the virus’s association with the hACE2 receptor in order to find mutations in its structure, which distinguish The emerging coronavirus and makes it more capable of causing infection, compared to other coronaviruses such as “SARS” and the RaTG13 virus, which is another coronavirus that infects bats and is associated with the same receptor (hACE2).

Where Did the Coronavirus Come From?

The study strengthens the theory of the virus’s evolution from other coronaviruses, which contributed to its transmission from one host to another, as it found that the RaTG13 bat virus contains a sequence of amino acids at the site of the RBD virus attachment similar to those in the same site of the emerging corona virus, which is likely to be a virus. The new corona may be caused by the evolution of the RaTG13 virus.

The study indicates that the mutations that occurred in the site of attachment of the virus may have helped its evolution in a way that allows it to pass from bats to humans. However, there are still differences between the two viruses, including with regard to their structural structure, and the chemical combination between the virus and the receptor (hACE2). While some scientists believe that although the RaTG13 virus is genetically closest to the emerging coronavirus, it is still far from it from an evolutionary point of view, as another study conducted by Chinese scientists and published in the “Nature Journal” indicated that the two viruses are similar in Genetic material by 96.2%.

With the large size of the genome of each of the two viruses, there is a difference in 1130 nucleotides – the building unit of DNA,” It is unlikely that the RaTG13 virus has gone through a large number of mutations to be able to transmit from bats to humans directly, and it is likely that there is more than one animal host that has transmitted the virus between them and acquired a sufficient number of mutations to enable it to infect humans.

The study conducted by “Fang Li” and his team suggests that it is possible that there is an intermediate host, which is a pangolin – the scaly anteater – as two types of viruses that infect this animal were isolated, and it was found that one of them could recognize and associate with the hACE2 receptor. However, there are still many factors that may control the transmission of the virus between an animal host and another human.